For the longest time I've been using the likes of Travis and AppVeyor to build open source projects that I work on. They rock. I've also recently been dipping my toes back in the water of Visual Studio Team Services. VSTS offers a whole stack of stuff, but my own area of interest has been the Continuous Integration / Continuous Deployment offering.

Historically I have been underwhelmed by the CI proposition of Team Foundation Server / VSTS. It was difficult to debug, difficult to configure, difficult to understand. If it worked... Great! If it didn't (and it often didn't), you were toast. But things done changed! I don't know when it happened, but VSTS is now super configurable. You add tasks / configure them, build and you're done! It's really nice.

However, there's been something I've been missing from Travis, AppVeyor et al. Keeping my build script with my code. Travis has .travis.yml, AppVeyor has appveyor.yml. VSTS, what's up?

Up until now, really not much. It just wasn't possible. Until it was:

If you prefer a build definition in YAML then we’re currently hard at work on that. You can enable it as a preview feature: https://t.co/hau9Sv8brf

When I started testing it out I found things to like and some things I didn't understand. Crucially, my CI now builds based upon .vsts-ci.yml. YAML baby!

You can get to "Hello World" by looking at the docs here and the examples here. But what you really want is your existing build, configured in the UI, exported to YAML. That doesn't seem to quite exist, but there's something that gets you part way. Take a look:

If you notice, in the top right of the screen, each task now allows you click on a new "View YAML" button. It's kinda Ronseal: 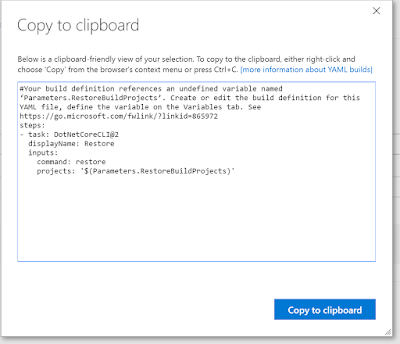 Using this hotness you can build yourself a .vsts-ci.yml file task by task.

A Bump in the Road#

If you look closely at the message above you'll see there's a message about an undefined variable.

Try as I might, I couldn't locate Parameters.RestoreBuildProjects. So no working CI build for me. Then I remembered Zoltan Erdos. He's hard to forget. Or rather, I remembered an idea of his which I will summarise thusly: "Have a package.json in the root of your repo, use the scripts for individual tasks and you have a cross platform task runner".

This is a powerful idea and one I decided to put to work. My project is React and TypeScript on the front end, and ASP.Net Core on the back. I wanted a package.json in the root of the repo which I could install dependencies, build, test and publish my whole app. I could call into that from my .vsts-ci.yml file. Something like this:

It doesn't matter if I have "an undefined variable named ‘Parameters.RestoreBuildProjects’". I now have no need to use all the individual tasks in a build. I can convert them into a couple of scripts in my package.json. So here's where I've ended up for now. I've a .vsts-ci.yml file which looks like this:

This file does the following:

I much prefer this to what I had before. I feel there's much more that can be done here as well. I'm looking forward to the continuous deployment piece becoming scriptable too.

Thanks to Zoltan and props to the TFVS team!