As part of the TypeScript 4.7 release comes a major upgrade to ECMAScript Module Support for Node.js. This post takes a look at what that means. 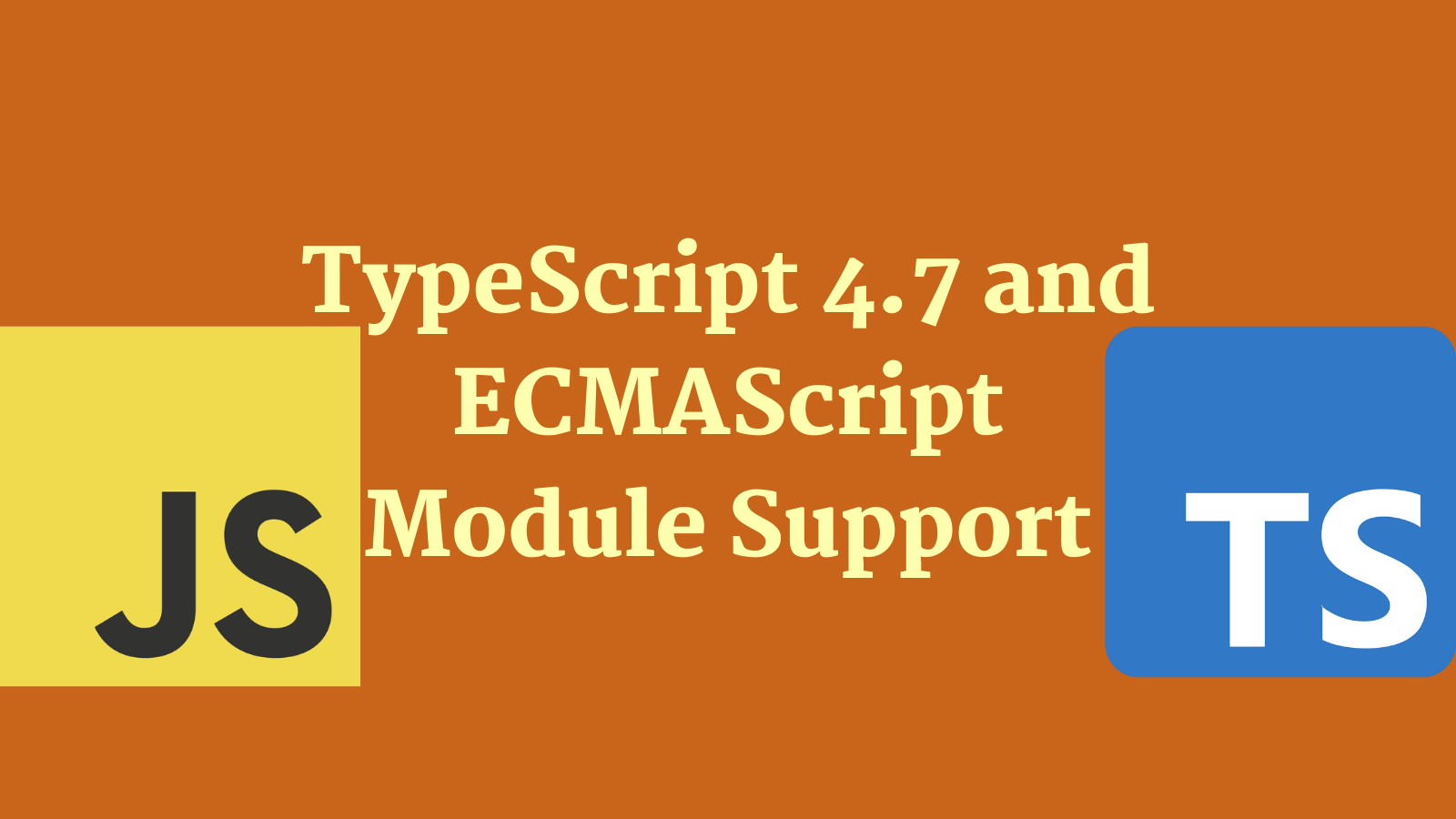 A short history of ECMAScript modules​

When ES6 shipped back in 2015, with it came the concept of modules for JavaScript. Back then it was known as "ES6 modules". These days they are called ECMAScript modules.

Whilst writing code using ECMAScript module semantics came quickly for front end, for the back end (which is generally Node.js) that has not the case. There's a number of reasons for this:

The TypeScript team have been experimenting with ways to offer support for ECMAScript modules from a Node.js perspective, and with TypeScript 4.7 support is being released.

We now have a package.json that looks something like this:

Node.js supports a new setting in package.json called type. This can be set to either "module" or "commonjs". To quote the docs:

Files ending with .js are loaded as ES modules when the nearest parent package.json file contains a top-level field "type" with a value of "module".

With that in mind, we'll add a "type": "module" to our package.json.

In order that we can make use of TypeScript ECMAScript modules support we're going to install TypeScript 4.7 (currently in beta):

With this in place we'll initialise a TypeScript project:

This will create a tsconfig.json file which contains many options. We will tweak the module option to be nodenext to opt into ECMAScript module support:

We've also set the outDir option, such that compiled JavaScript will go into that directory, and the declaration option such that .d.ts files will be generated. We'll also update the "scripts" section of our package.json to include build and start scripts:

With all that set up, we're ready to write some TypeScript ECMAScript modules. First we'll write a greetings.ts module:

There is nothing new or surprising about this; it's just a module exporting a single function named helloWorld. It becomes more interesting as we write our index.ts module:

The code above imports our helloWorld function and then executes it; writing the output to the console. Not particularly noteworthy. However, the way we import is. We are importing from './greetings.js'. In the past we would have written:

This can feel slightly odd and unnatural because we have no greetings.js in our codebase; only greetings.ts. The imports we're writing, reflect the code that will end up being executed; once our TypeScript has been compiled to JavaScript. In ES modules relative import paths need to use extensions.

The easiest way to demonstrate that this is legitimate, is to run the code:

ECMAScript and CommonJS side by side​

Part of ECMAScript module support is the ability to specify the module type of a file based on the file suffix. If you use .mjs, you're explicitly saying a file is an ECMAScript module. If you use .cjs, you're explicitly saying a file is an CommonJS module. If you're authoring with TypeScript you'd use mts and cts respectively and they'd be transpiled to mjs and cjs.

Happily Node.js allows ES modules to import CommonJS modules as if they were ES modules with a default export; which is good news for interop. Let's test that out by writing a oldGreetings.cts module:

Exactly the same syntax as before. We'll adjust our index.ts to consume this:

Note that we're importing from './oldGreetings.cjs'. We'll see if it works:

What files are emitted?​

Before we close out, it might be interesting to look at what TypeScript is doing when we run our npm run build. It transpiles our TypeScript into JavaScript in our lib directory:

It's also interesting to look at the difference in the emitted JavaScript. When you consider how similar the source files were. If you look at greetings.js:

This is the same code as greetings.ts but with types stripped. However, if we look at oldGreetings.cjs we see this:

In the middle the same code as oldGreetings.cts but with types stripped, but around that boilerplate code that TypeScript is emitting for us to aid in interop.

We've seen what TypeScript support for ECMAScript modules looks like, and how to set up a module to embrace it.

If you'd like to read up further on the topic, the TypeScript 4.7 beta release notes are an excellent resource.