I've been using Visual Studio for a long time. Very good it is too. However, it is heavyweight; it does far more than I need. What I really want when I'm working is a fast snappy editor, with intellisense and debugging. What I've basically described is VS Code. It rocks and has long become my go-to editor for TypeScript.

Since I'm a big C# fan as well I was delighted that editing C# was also possible in Code. What I want now is to be able to debug ASP.Net Core in Visual Studio OR VS Code. Can it be done? Let's see....

So far, so straightforward. What will VS Code make of this?

I cd my way to the root of my new ASP.Net Core Web Application and type the magical phrase "code .". Up it fires. I feel lucky, let's hit "F5". Huh, a dropdown shows up saying "Select Environment" and offering me the options of Chrome and Node. Neither do I want. It's about this time I remember this is a clean install of VS Code and doesn't yet have the C# extension installed. In fact, if I open a C# file it up it tells me and recommends that I install. Well that's nice. I take it up on the kind offer; install and reload.

When it comes back up I see the following entries in the "output" tab:

Note that mention of "debugger" there? Sounds super-promising. There's also some prompts: "There are unresolved dependencies from 'WebApplication1/WebApplication1.csproj'. Please execute the restore command to continue"

So it wants me to dotnet restore. It's even offering to do that for me! Have at you; I let it.

The other prompt says "Required assets to build and debug are missing from 'WebApplication1'. Add them?". This also sounds very promising and I give it the nod. This creates a .vscode directory and 2 enclosed files; launch.json and tasks.json.

So lets try that F5 thing again... http://localhost:5000/ is now serving the same app. That looks pretty good. So lets add a breakpoint to the HomeController and see if we can hit it: 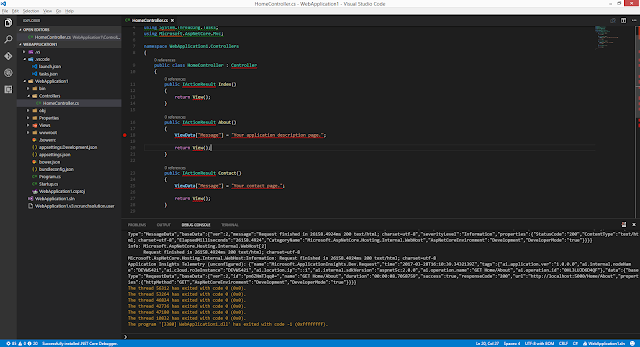 Well I can certainly add a breakpoint but all those red squigglies are unnerving me. Let's clean the slate. If you want to simply do that in VS Code hold down CTRL+SHIFT+P and then type "reload". Pick "Reload window". A couple of seconds later we're back in and Code is looking much happier. Can we hit our breakpoint? 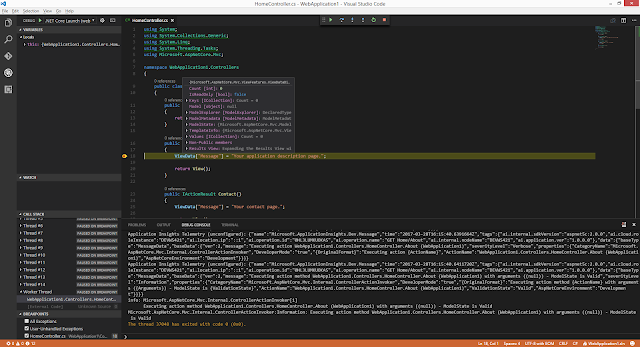 Yes we can! So you're free to develop in either Code or VS; the choice is yours. I think that's pretty awesome - and well done to all the peeople behind Code who've made this a pretty seamless experience!