Whilst things did improve by fiddling with Windows Defender it wasn't a 100% fix which makes me wary. Interestingly, VS Code was always open when I did experience the issue and I haven't experienced it when it's been closed. So it may be the cause. I've opened an issue for this against the VS Code repo - it sounds like other people may be affected as I was. Perhaps this is VS Code and not Windows Defender. Watch that space...

The issue was VS Code. The bug has now been fixed and shipped last night with VS Code 1.14.0. Yay!

I've recently experienced many of my npm installs failing for no consistent reason. The error message would generally be something along the lines of:

I spent a good deal of time changing the versions of node and npm I was running; all seemingly to no avail. Regular flakiness which I ascribed to node / npm. I was starting to give up when I read of other people experiencing similar issues. Encouragingly Fernando Meira suggested a solution:

I got the same problem just doing an npm install. Run with antivirus disabled (if you use Windows Defender, turn off Real-Time protection and Cloud-based protection). That worked for me!

I didn't really expect this to work - Windows Defender has been running in the background of my Windows 10 laptop since I've had it. There's been no problems with npm installs up until a week or so ago. But given the experience I and others have had I thought I should put it out there: it looks like Windows Defender has it in for npm. Go figure.

Alas Windows Defender doesn't stay dead for long; it's like a zombie that rises from the grave no matter how many times you kill it. So you might want to try configuring it to ignore node.exe: 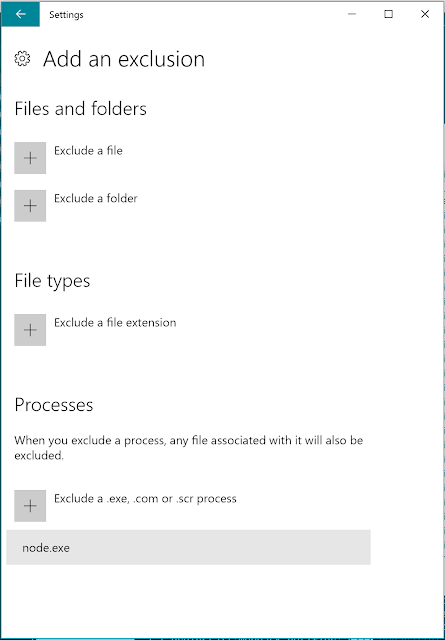 Or switching to Linux...