I've recently started a new role. Perhaps unsurprisingly, part of the technology stack is TypeScript. A couple of days into the new codebase I found a bug. Well, I say I found a bug, TypeScript and VS Code found the bug - I just let everyone else know.

The flexibility that TypeScript offers in terms of compiler settings is second to none. You can turn up the dial of strictness to your hearts content. Or down. I'm an "up" man myself.

The project that I am working on has the dial set fairly low; it's pretty much using the default compiler values which are (sensibly) not too strict. I have to say this makes sense for helping people get on board with using TypeScript. Start from a point of low strictness and turn it up when you're ready. As you might have guessed, I cranked the dial up on day one on my own machine. I should say that as I did this, I didn't foist this on the project at large - I kept it just to my build... I'm not *that* guy!

I made the below changes to the tsconfig.json file. Details of what each of these settings does can be found in the documentation here.

I said I found a bug. The nature of the bug was an unused variable; a variable was created in a function but then not used. Here's a super simple example:

The other compiler settings will similarly highlight simple mistakes it's possible to make and I'd recommend using them. I should say I've written this from the perspective of a VS Code user, but this really applies generally to TypeScript usage. So whether you're an alm.tools guy, a WebStorm gal or something else entirely then this too can be yours!

I'd also say that the strictNullChecks compiler setting is worth looking into. However, switching an already established project to using that can involve fairly extensive code changes and will also require a certain amount of education of, and buy in from, your team. So whilst I'd recommend it too, I'd save that one until last.

TypeScript first gained support for tsconfig.json back with the 1.5 release. However, to my lasting regret and surprise Visual Studio will not be gaining meaningful support for it until TypeScript 1.8 ships. However, if you want it now, it's already available to use in beta.

I've already leapt aboard. Whilst there's a number of bugs in the beta it's still totally usable. So use it.

External TypeScript Compilation and the VS build#

I'm working on a project which has been built using TypeScript since TS 0.9. Not surprisingly, this started off using the default Visual Studio / TypeScript workflow. Active development on the project ceased around 9 months ago. Now it's starting up again. It's a reasonable sized web app and the existing functionality is, in the main, fine. But the users want to add some new screens.

Like any developer, I want to build with the latest and greatest. In my case, this means I want to write modular ES6 using TypeScript. With this approach my code can be leaner and I have less script ordering drama in my life. (Yay import statements!) This can be done by bringing together webpack, TypeScript (ts-loader) and Babel (babel-loader). There's an example of this approach here. Given the size of the existing codebase I'd rather leave the legacy TypeScript as is and isolate my new approach to the screens I'm going to build. Obviously I'd like to have a common build process for all the codebase at some point but I've got a deadline to meet and so a half-old / half-new approach is called for (at least for the time being).

Goodbye TypeScript Compilation in VS#

Writing modular ES6 TypeScript which is fully transpiled to old-school JS is not possible using the Visual Studio tooling at present. For what it's worth I think that SystemJS compilation may make this more possible in the future but I don't really know enough about it to be sure. That's why I'm bringing webpack / Babel into the mix right now. I don't want Visual Studio to do anything for the ES6 code; I don't want it to compile. I want to deactivate my TypeScript compilation for the ES6 code. I can't do this from the tsconfig.json so I'm in a bit of a hole. What to do?

Well, as of (I think) TypeScript 1.7 it's possible to deactivate TypeScript compilation in Visual Studio. To quote:

there is an easier way to disable TypeScriptCompile:

Hello TypeScript Compilation outside VS#

Have no fear, I gotcha. What we're going to do is ensure that Visual Studio triggers 2 external TypeScript builds as part of its own build process:

How do we do this? Through the magic of build targets. We need to add this to our .csproj: (I add it near the end; I'm not sure if location matters though)

There's a few things going on here; let's take them one by one.

This target triggers our external builds. One by one it runs the following commands:

npm install
Installs the npm packages.
npm run build-legacy-typescript
Runs the "build-legacy-typescript"script in our package.json
npm run build -- --mode $(ConfigurationName)
Runs the "build"script in our package.json and passes through a mode parameter of either "Debug" or "Release" from MSBuild - indicating whether we're creating a debug or a release build.

As you've no doubt gathered, I'm following the convention of using the scripts element of my package.json as repository for the various build tasks I might have for a web project. It looks like this:

As you can see, "build-legacy-typescript" invokes tsc (which is registered as a devDependency) to print out the version of the compiler. Then it invokes tsc again using the project flag directly on the Scripts directory. This is where the legacy TypeScript and its associated tsconfig.json resides. Et voilá, the old / existing TypeScript is compiled just as it was previously by VS itself.

Next, the "build" invokes a gulp task called, descriptively, "build". This task caters for our brand new codebase of modular ES6 TypeScript. When run, this task will invoke webpack, copy static files, build less etc. Quick digression: you can see there's a "watch" script that does the same thing on a file-watching basis; I use that during development.

The task that runs to clean up artefacts created by WebClientBuild.

Since we're compiling our TypeScript outside of VS we need to tell MSBuild / MSDeploy about the externally compiled assets in order that they are included in the publish pipeline. Here I'm standing on the shoulders of Steve Cadwallader's excellent post. Thanks Steve!

CollectLegacyTypeScriptOutput and CollectGulpOutput respectively include all the built files contained in the "Scripts" and "dist" folders when a publish takes place. You don't need this for when you're building on your own machine but if you're looking to publish (either from your machine or from TFS) then you will need exactly this. Believe me that last sentence was typed with a memory of great pain and frustration.

So in the end, as far as TypeScript is concerned, I'm using Visual Studio solely as an editor. It's the hooks in the .csproj that ensure that compilation happens. It seems a little quirky that we still need to have the original TypeScript targets in the .csproj file as well; but it works. That's all that matters. 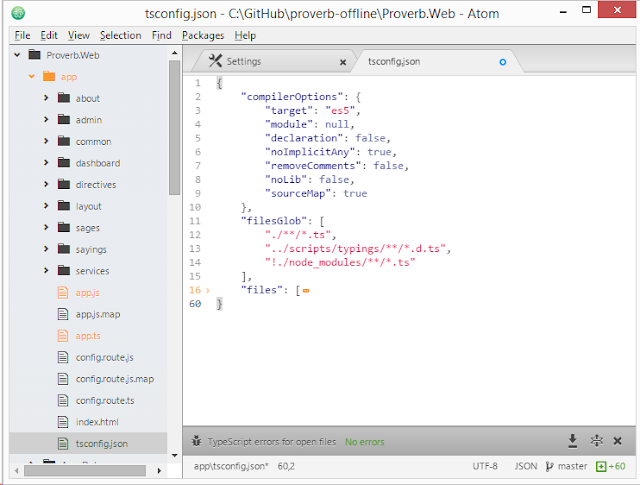